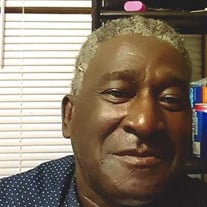 Henry Lee Smith was born to the late Floyd Smith and Colleen Givance. He accepted Christ at an early age at Mt. Zion MB Church in Sledge Mississippi under the leadership of the late Reverend C.C.Curly. The Lord called him home to a better resting... View Obituary & Service Information

The family of Henry Lee Smith created this Life Tributes page to make it easy to share your memories.

Henry Lee Smith was born to the late Floyd Smith and Colleen...

Send flowers to the Smith family.