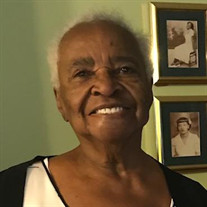 Reflections of Life A beautiful baby girl named Dorothy was born on July 2, 1933 to the Late Ernest and Angeline McLemore. At an early age she professed a hope in Christ at Little John Baptist Church. She later joined Mississippi Boulevard Christian Church where she served faithfully until her health began to decline. Due to her love for God and the word, her spiritual journey was filled with work for the Church and a quest for knowledge. She was an avid reader. Her spiritual library confirms this. She was a student of Bible Study Fellowship, Precept Ministries International, Daily Disciples, and Naomi Circle. She was a member of Golden Friends a Christian Senior Ministry at MBCC. She also attended Bible study classes at various churches. Her daily devotions included discussions about the bible and prayer with her prayer partners, Ernestine Jones and Genny McKenny. She loved to cook and organize her famous weekly soul food Sunday dinners that were extended to anyone who dropped by. She started the week out with “What’s the menu for next Sunday’s Dinner?” Her Granddaughter captured some of “Mom’s original” recipes in a book for her 80th birthday. In her spare time, you could find her sitting at the computer working on an electronic jigsaw puzzle. She also loved to shop and travel. Her work life included Inspector for Hunter Fan, and after earning her Cosmetology license she worked for Georgia’s Designer’s Touch as a hair stylist. Later she worked for Walmart in soft lines clothing. One of her greatest joys in life was her family. She was united in Holy Matrimony to the Late Willie B. Bradford. They were blessed with eight children. Three children preceded her in death, Kenneth, Diane and Willie Jr. Her departure has left a void in the hearts of the remaining five: Marva Taylor, Terry Wright (Charlie), Randy Bradford (Bertha), Jacquelyn Perkins (Clevell) of Memphis, Tennessee and Sheryl Milan of Nashville, Tennessee; Fourteen Grandchildren, fourteen Great Grandchildren, eleven Great-Great Grandchildren and a host of other relatives and friends. She was claimed by many as “Mom” and was a friend to all.

Reflections of Life A beautiful baby girl named Dorothy was born on July 2, 1933 to the Late Ernest and Angeline McLemore. At an early age she professed a hope in Christ at Little John Baptist Church. She later joined Mississippi Boulevard Christian... View Obituary & Service Information

The family of Dorothy Bradford created this Life Tributes page to make it easy to share your memories.

Send flowers to the Bradford family.